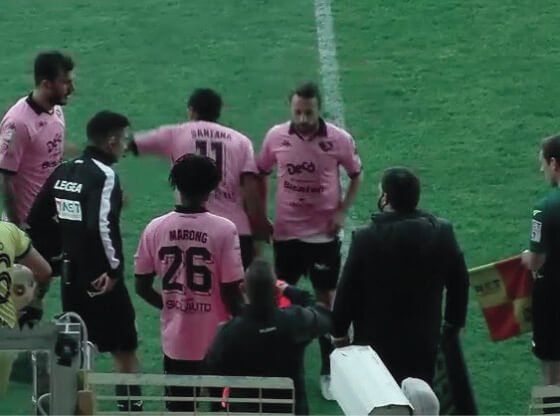 FIRST HALF: Palermo vs Cavese

The first of the game is for the guests who will attack from left to inside in yellow suits; the pink ones instead of with the pink shirt, shorts, and black socks. Dangerous hosts in the 4th minute of the game. Floriano widens for Valente who looks in the middle and serves a low cross on which Rauti and Doda who had thrown themselves in do not arrive. At 6 ‘another opportunity for the rosanero, who started strong. Valente tries to cross, the ball is deflected, and arrives on the right of Floriano who kicks and touches the post to the right of Kucich.

Cavese took the lead at 10 ‘. Cat on the right challenges Marconi, crosses in the center, Accardi arrives on the ball who does not move away but serves Bubas who has the simplest thing to do, that is to put on the net and does it by bringing him forward. Error in the construction phase of Palermo, the Campanians recover the ball and Marconi must intervene in a providential manner on Senesi launched towards Pelagotti’s door. Cavese still dangerous. Gatto turns well on Valente, crosses into the area, and tries to push away Lancini who, however, hits the crossbar and the ball ends up between the feet of Bubas who kicks and the ball goes off to the left of Palagotti.

Palermo tries the reaction, but the guests tighten the lines well. At 20 ‘the Sicilians are close to equal with Kanoute. Rauti tries to kick at the goal, but his conclusion is countered and the ball remains in the area, on the same Kanoute rushes and kicks with his left, with the conclusion that is deflected for a corner. At 24 ‘Rauti tries to cut the field with the ball and chain, the rosanero striker is brought down by Pompetti who receives the first yellow card of the match.

The draw of Palermo at 26 ‘. De Rose’s punishment for Valente who crosses into the area, goalkeeper Kucich throws himself on the ball who misses the intervention, and leaves the ball there, Lancini arrives on the ball and puts in and draws the score. The extreme defender of Campania is injured and must leave the field on a stretcher. In place of Kucich in the Russian field. Palermo overturns it at 31 ‘. Doda pushes to the right, serves De Rose back, who raises his head and sees the cut in the area by Valente who puts her behind Russo on the fly.

Minute 37, Cavese dangerous. Pompetti kicks the free-kick at the bench, the ball crosses the whole area and ends up between the feet of De Franco who does not manage to push into the net. De Rose close to the 3-1 goal in the 40th minute. The former Reggina midfielder receives the ball from Marconi, raises his head, and kicks with his right, touching the crossbar.

There are 4 minutes of recovery decreed by the referee. At 1 ‘of recovery Lancini offers a long ball for Valente that widens for Floriano who advances and kicks with the right, he will hit the outside of the net and going close to the 3-1 goal. The first half ends without other emotions and with the result of 2-1 for the rosanero.

Highlights Palermo vs Cavese – The Photogallery

SECOND HALF: Palermo vs Cavese

The challenge resumes without changes on both sides. Immediately free-kick for Palermo, Valente takes charge of it but, however, hits the barrier and the ball goes out in a corner kick. Cross from Valente’s left in the 51st minute, none of his teammates arrive on the ball and tries to put it back inside Doda, but they push the bells away Forcing of the rosanero who try to close the challenge. Several crosses, but they are not very precise and this favors the guests. A double change in Palermo that at 57 ‘sends Santana and Marong to Floriano and Lancini.

Rosanero close to scoring the 3-1 at 68 ‘. Valente serves Santana who cuts in the area and with the heel serves Luperini who shoots very high from two steps. The bells draw at 76 ‘. Error in the disengagement phase of Luperini that allows Cavese to restart, the Campanians cross in the center, Marong deflects and hits Accardi with the ball that remains there and Matera pushes in, equalizing the scores. The spirits on the pitch light up with Scoppa and Santana pushing each other and being warned.

Palermo scored in the 82nd minute. Russo has to postpone, but at the moment of the launch, he hits Luperini on the back and favors Rauti who enters an area and kicks, scoring the goal of 3-2. De Rosa tries for a free-kick, but his ball ends up just outside. Campani finishes in ten because of the double yellow remedied by Scoppa at 93 ‘. The Match Palermo vs Cavese ended 3-2 for the rosanero.

Highlights Palermo vs Cavese – The video: