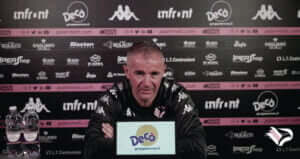 Coach Filippi before the 14th match against Potenza

Palermo faces Potenza to extend the positive streak of results and to continue chasing Bari. Giacomo Filippi intervenes at the press conference to present the match, scheduled for Sunday at 2.30 pm at Renzo Barbera.

Potenza is a well-established team and knows how to reach the set goal. For this we have to keep the antennas straight: he knows how to do wrong and how to face these championships. It is true that it does not seem like a favorable moment, but we know we are meeting a well-equipped and well-placed team.

On Sunday we interpreted the game well. The boys are good at adapting to the opponent. Tomorrow it will be a similar match, we play at home but we have to play the game right away and carelessness can cost you dearly.

Ciccio is a player of charisma who claims his presence on the pitch. But I am calm because those who play will make an equally valid contribution. We have a large squad that can make up for these absences. In Andria the interpretation was excellent and we have to continue like this.

Lancini I think this year he has played more than anyone. On Sunday we also chose to put him out for some technical and tactical situations involving the opponent. He is training well and doing well. I don’t ask myself the Lancini problem.

I will choose the captain. We have so many players who can do it. We will decide with the staff who to assign the band to.

Video / Coach Filippi before the 14th match against Potenza

Players / Coach Filippi before the 14th match against Potenza

Unavailable: Accardi, Doda (called up by the Albanian Under 21 team)