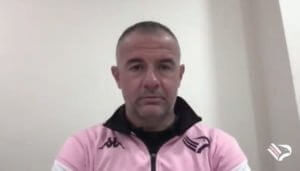 Coach Filippi before the 16th match against Picerno

Palermo continues the pursuit of leaders Bari and challenges Picerno, away from home, on the 16th day of group C of Serie C. Rosanero coach Giacomo Filippi, on the eve, presents the match at a press conference.

Our priority is the guys who always work well and put me in difficulty every day. The results are based on the interpretation given to each match and at this moment we are very proactive, we must continue to be so “.

The last match with the Picerno does not matter. Because since that time he has entered a lot of players. I like how he plays and with Colucci they are continuing to work. Team that plays well and proactive. We have to be very careful. It can put all opponents in trouble. Delicate match.

To continue to do well we need to raise the intensity even more. We are ready to give important signals. The boys accept them and it gives me hope but the pitfalls are around the corner. Lancini accused a discomfort in the knee, it does not seem anything serious. Marong went to the Primavera: we thought about letting him play and putting minutes in his legs.

It gives me hope to see every day a team that gives its best and trains at high intensity. A healthy group that wants to do well and does not spare itself. From here to Bari there are 4 matches but the present is called Picerno.

I see growth that bodes well. We notice it and there is more awareness. The group knows each other better and it was natural since they are a new team regardless of those left over from last season. It took some time.

This group has ample room for improvement but it all depends on us. The boys have to “mentalize” the goal. Without looking far or near things escape us. Accardi? It’s nice that the kids can recognize that the staff are there for them and that they work to make them comfortable. We recognize that kids assimilate. It’s a nice party game.

We must try to bring as many people as possible to the stadium. With the same desire I was talking about before, I am convinced that we can attract more and more fans to Barbera by making the Palermitans who are in love with this team passionate about it.

Miccoli was one of the greatest architects of Palermo ever. But I don’t feel like saying anything about personal events. He is very sorry, sometimes with the staff one wonders why. How do you get into certain situations?.

Silipo and Soleri are two owners. As well as Floriano and Giron: I wanted 24 leaders and they responded present. Many are players who train at 1000 during the week. They make you understand that they want to play at all costs. A positive thing for me of course.

VIDEO / Coach Filippi before the 16th match against Picerno

Probable Formations / Coach Filippi before the 16th match against Picerno

PreviousMiccoli will go to prison for extortion aggravated / 2021NextHighlights Picerno vs Palermo, 1-0 Serie C.
Back to top