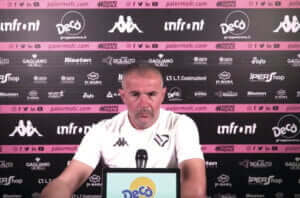 Coach Filippi before the 8th Match against Foggia

Palermo coach Giacomo Filippi intervenes at the press conference to present the match against Foggia.

We know that Zeman’s teams have always carried out a purposeful, open-minded kick. We like it too, it will be an open and beautiful match. Zeman’s football is also made up of movements that have marked an era, you have to be careful about certain dynamics. Silipo and Valente will be missing.

Valente is an important player in this chessboard, but Giron also guarantees an offensive and defensive phase. We will not find it difficult to replace it. Fella was late in condition and overcame some nuisance. I see him very enterprising and eager to break free, but he guarantees me the performance even without a goal.

I don’t think we will find it difficult to replace Buttaro. It’s all in the collective work and the interpretation of the match. If we do what we did in Castellammare di Stabia, I am convinced that tomorrow we will have a great match. Dall’Oglio was stopped today as a precaution but he will be part of the match.

After 7 games I don’t feel like saying that we have to aim for second place, even if there is a gap from Bari. The team on the field does everything that is proposed, we need more determination and clarity in the finalization phase.

Audience at the stadium? What better occasion for the fans to come and encourage their players in such an important match.

It is normal that I am not happy with the ranking. Some performances have not been centered, but on others I can not blame anything. If we had 3 or 4 more points we would have been in the normal schedule. After 7 games I don’t throw myself down.

Palermo is a place sought after by many, then you have to be good at being chosen. The voices of others do not bother me.

Palermo lacks the cheek of a few months ago. There is a need for more resourcefulness, to play without too many mental blocks. You have to develop what you do in training. In recent days I see more safety and more awareness, the road is the right one.

We need to make performances and points. The corporate issue does not create any imbalance for me and I think the same applies to the boys as well.

Coach Filippi before the 8th Match against Foggia – The video

The Palermo players before the 8th Match against Foggia

There are several players not called up, including Valente for the blow to the ankle and Silipo for a feverish attack.

Many absent players. Palermo is preparing for the match against Foggia with some problems regarding the formation to be sent to the field.

Buttaro is out due to disqualification, while Accardi, Valente following the blow to the ankle a week ago, and Silipo, also unavailable for a fever attack for which he was subjected to a swab, will not be part of the race, with a negative result.

Giacomo Filippi, Palermo coach, has called up 22 players for the match against Foggia, a match valid for the recovery of the 33rd day of Group C of Serie C. Let’s take a look at the complete list of athletes available to the rosanero coach:

There are 24 players called up by Zeman for the match between Palermo and Foggia, In defense there will be Nicoletti, the full-back is struggling with an injury remedied during the match against Messina.