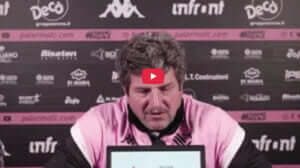 Mr.Baldini, Conference before the match against Campobasso

Silvio Baldini intervenes in the press conference on the eve of the match in Campobasso and returns to highlight the psychological as well as tactical aspect, asking Palermo to learn how to manage moments of difficulty and consequently manage well the game always attacking the opponent. On the training front, however, Baldini does not hide: Somma and Odjer will be the owners.

What if seventh place worries me? Worrying after three games is excessive in my opinion, otherwise I would have to change jobs. If one gets worried immediately, then he cannot convey the best feelings to the team. There are still many games. If anything, I have to worry about understanding why we went from an excellent first half to the breathlessness of the second. I worry about understanding the reason for these drops. But the idea I got is simple. The boys got overwhelmed by the negative episode and the team got lost: this episode was enough to make us feel anxious about not getting the result and when it happens you pay for it. On the contrary: sometimes it gets lost; at least we tied.

Doda had a distortion problem yesterday and is not recoverable. Dall’Oglio, on the other hand, has a hematoma that has not regressed: he wanted to be with his team-mates but with Messina in fact he was not available. Unfortunately, the pain became too strong even in training on Friday. Campobasso? The opponent must be attacked. They will not play a throw-in. If you give your opponents opportunities to restart, you always take risks

On the self-esteem front, you need to train it by focusing on performance rather than result (which depends on various factors). And by performance I mean giving the things the team needs and giving them with confidence. You must feel free and willing: for example, we can also undress in the middle of the street, but you must be hungry to prove who you are. If you start finding little footholds to justify negative things, you’ll never have self-esteem.

On the mental coach: The first thing I did when I was called was to point out that the team got lost in those games that seemed easier on paper. There may be but it cannot be an excuse. You don’t have to be afraid to prove who you are. And in this sense the work of the mental coach becomes important; with the boys he already has a good relationship and explains to the boys what to do and what to focus on. Problems must put you in a position to find the solution, not get into trouble.

Somma? He trained very well, he will certainly play. I already told him. He has shown great professionalism and desire: Lancini is disqualified and it’s up to him. I am convinced that he will make a great performance.

Leader on the pitch like Santana last year? Unfortunately Santana is not there this year, it is clear that he has charisma and is in love with the game. A great support. But having said that, the team must behave as in the first half against Messina: it must put its heart into it and not be influenced by the episodes, remain compact. Odjer? He too will play from the first minute. In the place of those who do not know yet but he will play: he has always shown that he has desire and is present. The module? When we manage to do the smooth maneuver, opportunities come. I have tried them all over the years. But it is not so much the form but the spirit that makes you achieve great things and many scoring situations.

Let me be clear: I do not feel like a football teacher, one who has a concept of football. If anything, the feature that I want to give to the team is to be organized and fast to score goals. Obviously, we all wish Wednesday’s bitterness hadn’t been there. Let me give you an example: once Platini’s Juventus won the derby 2-0 and then was reassembled 2-3 in 5 minutes. Even the champions have blackouts: it’s too easy to say I win 2-0 I cover myself; but that’s not football. There are always episodes. The problem is that Palermo (in those 20 minutes) went from playing on 20 meters to playing on 40 meters. We weren’t short and aggressive, ready on one-on-one. We failed to do what we know how to do. Football is made up of many episodes.

Too short and exposed on the side aisles? In fact it’s true: it happened the other night. It is clear that if you put yourself in the bad zone then it is useless to stay in 40 meters, where there is the ball there must be someone to prevent the restart. On the goal taken from a corner kick … it can happen. Defence? We will certainly mark the best ones. As for the others, however, I prefer to play it on space and not on man.

VIDEO / Mr.Baldini, Conference before the match against Campobasso