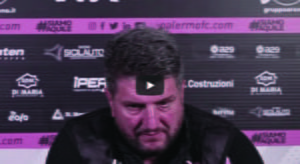 Palermo is ready for the semifinals of the Serie C playoffs: Silvio Baldini spoke at the press conference to present the first leg match against Feralpisalò, which will be played at the home of the Lombards.

Feralpisalò is an excellent team coached by an excellent coach. We have to anticipate their ideas, he is an opponent of the tough ones. But Palermo is there and they want to go all the way, even if they consider their opponents to be stronger than they are.

Turnover? Let’s not look at the tiredness, it would seem an alibi. The game has two faces: who starts it and who ends it. Whoever starts it must have some characteristics and whoever finishes it must have others. Those who enter must assert their freshness. The example is given by Real Madrid – Manchester City, when the pace drops there are players who get excited, I learn from Ancelotti. How can you ignore someone playing against PSG, Chelsea and City?

Fear and fear are words that I do not accept. I don’t worry because I have great respect for my opponents, I want to win this challenge by deserving and not speculating. We have content that can hurt Feralpisalò. If they are better I will recognize it, but this will be difficult because I have a very strong team. We play this match as if it were a final, as if it were the last.

Accardi looks great and is 100%. The first thing we did after Entella was to go and see the characteristics of Feralpisalò, which is a strong opponent and with one more day of rest than us. I am convinced that in the end we will win this tournament.

One day less rest? All the details matter, this shouldn’t be a mitigating factor. We must try to compensate by taking care of all the smallest details. My team has the capacity for humility. The fact of having an audience of 35,000 against one of 2,000 must also be a reason for responsibility.

My training is always based on the field. I never decide before on midfielders but I let myself be guided by what I see on the pitch. Silipo has matured a lot especially as a boy, he has understood that football is not just dribbling, crosses and shots, but also application when the team defends itself.

Fatigue is not a problem, he makes up for with those who start from the bench. If we are tired we are too. Starting from the first minute means nothing, the final result counts.

I want to bring Palermo to Serie B because a team like this has such a blazon that it cannot play the interregional or Serie C. Var? I’m happy that there is, if there was with Entella the match ended in the first half with a goal from Floriano and a penalty against Brunori. But it was better that way, going from below 0-2 made us and the public enjoy more. Female referee? Nothing changes compared to a male referee. Women also have the right to a certain type of career, men’s mistakes are hidden. With Entella, the referee whistled twice to show his personality, making a mistake. I think that from a biological point of view, women have more sense of balance than men.

At home we have won all the last few games: we have understood that it does not change at home or away. You have to express yourself beyond the public.