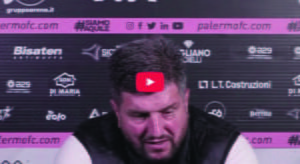 Silvio Baldini speaks at the press conference on the eve of the match against Virtus Entella with optimism.

“The advantage is that already with the Triestina we felt the thrill of full Barbera, but we have to do the same things as Chiavari trying to give even greater depth to our performance. Thirty-two thousand pushes and it is an indisputable advantage. We hope that the team can give satisfaction from the point of view of the game because against Triestina it was a painful match. Tomorrow we will try to do better. We think we lost in the first leg “.

“The other evening Valente did not have a physical problem but a familiar one with the child who was ill and hospitalized. He was good at concentrating and it wasn’t the one in the Trieste race, but his contribution is fundamental. It is no longer time for tests, but to tighten the times and suffer “.

“Accardi has recovered but does a differentiated job. He does a series of therapies that force him to train separately but if needed he can take the field. I’m not superstitious but to do my job you have to have the courage to say things even if they don’t happen. But I feel it will happen this time. The game is difficult but people of faith never lose. I believe that this time Palermo is ready for Serie B “.

“La Triestina had solutions that made us suffer and Entella too is not to be taken lightly. We must be careful but we know that we too want to give satisfaction. We will fight and it will be a problem for the opponents ”.

“We have reviewed all the situations in which we conceded and we will work on it again today. There is never a chance. You can slip on the pitch, but you have to analyze that episode professionally. Scoring actions arise because sometimes there is not the right attention. “

“I haven’t decided who plays, I make the pitch decide based on what I see. I’m sure I’m not mistaken because if one or the other plays, it changes little. De Rose is our captain, fresher, he will definitely start as a starter. Then I’ll try to choose the others. However, the race is long and someone will have to enter “.

“The players are busy. They know they are in the final part and I can count on them. Do people appreciate me? Too big a gift, I don’t think I’m one that can bring 32,000 people together. I think they like me for simplicity and because I’m one of them. The love for the shirt is so great that the stadium would fill up anyway. A very visceral love that enters you as a child “.

“What Volpe says doesn’t interest me. Everyone expresses their opinion, has not offended anyone. He saw it this way “.

“Tomorrow I think the ice is broken but we have to fight and suffer to bring home this qualification. It is the right year and we are not giving up an inch, but with serenity. Avoiding unnecessary nervousness, we will ferociously push to satisfy the fans ”.

“If I thought that one team is better than the other, it means that we have already lost. We must face any opponent with our weapons. Either one or the other doesn’t interest me. I live it like a fan: I feel electric and energetic. I feel the desire to do, for the game to arrive. But I’m not a fan and I have to maintain a certain clarity to make mistakes as little as possible “.

Here are the probable formations of PALERMO vs ENTELLA