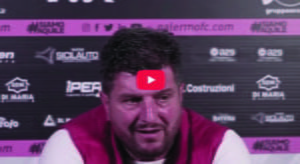 Silvio Baldini’s rosanero club is approaching the return match against Feralpisalò which is worth the pass for the Serie C playoff final.

This team has understood that they must play for the performance and not for the result. We need to try to do the right things by staying focused and clear-headed and having ideas. When you go out on the pitch you need to have the ideas to know how to solve certain situations. Without ideas, it becomes difficult to get the most out of it. It’s not over yet, I’ve never tried to relax the team – Baldini said at the conference -.

We are working as if we had lost in Salò, I am confident because I see the players attentive. They know that playing in front of 35 thousand people in this category is not something every day and we want to give satisfaction to our people. Destiny is also on our side and has shown it by making us play the eventual final return to ‘Barbera’. This is a big plus

I’m evaluating, I have to try to choose wisely, without being overwhelmed by emotion. This is a tournament, not a championship. Feeling the target close, you don’t feel fatigued. If one does not have muscle problems, but only feels fatigue, it is not a big problem because recovery times are shortened. On the warnings it will be like the match in Bari, if you put yourself well some players will biosensors will protect them

I have never asked myself what other people think, I have set very specific goals. I think these guys understood that what they were doing was important to their growth. I try not to be influenced by what you read around, otherwise, I would go and bring the superficiality to the team. In place of Lancini, either Somma or Perrotta will play ”, concluded Mr. Baldini.