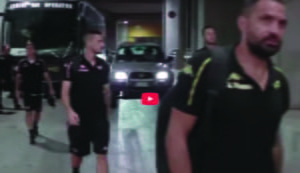 Bari – Palermo is the first away point in this Serie B. The teams split the stakes: at the San Nicola it ends 1-1

The teams make their entrance on the field of play, hosts in an entirely white suit while Palermo plays with the classic pink shirt and black shorts. The kick-off is entrusted to the squads, who in this first half attack from left to right.

The teams start off strong and Bari, in the fifth minute, suffered two chances to take the lead first with Folorunsho and then with Cheddira, both defused by the rosanero defense. Two minutes later a great chance also for Palermo with Buttaro who puts the ball in the middle of the Bari penalty area, after a series of rebounds the ball reaches Elia only in front of Caprile but the red and white extreme defender overtakes himself in the exit on the conclusion of the rosanero player.

The match, in the first minutes, is very lively with Palermo gradually taking the field with very high pressure on the Bari ball carriers. At the fifteen minute, sensational action always for the squads with Broh recovering the ball and flying away using the hole on the right, ball in the middle for Floriano who alone, in the small area, “smoothes” the ball face to face with Caprile, failing the potential ball of the advantage.

At minute eighteen Buttaro’s foul on the trocar, yellow for him, and punishment for Bari but Cheddira’s low shot ends at the bottom. Two minutes later the home team also shows up with Ricci who, after an insistent choral action, ends towards the door finding the low intervention of Pigliacelli. In the twenty-second minute, Bari is still dangerous with Botta’s ball from the right that slips through the rosanero area, the ball reaches Folorunsho but Buttaro remains in position and opposes the shot by the red and white midfielder with a sure shot.

After the cooling break foreseen to the high temperatures, Palermo returns to the field with the same attitude as the first part of the match, very aggressive with high pressing and immediate verticalization to trigger the attacking midfielders and Brunori. At 35 ′ Bari is the lightning to try to unlock the match with Cheddira who wins the one on one with Nedelcearu and ends towards the goal, Pigliacelli is in position and rejects the opponent’s attacking conclusion.

At the thirty-seven minute, Palermo takes the lead: the pinks recover the ball in pressing with Floriano, service on the left for Valente who ends around the edge and beats Pucino. Initially, the referee had canceled the goal for offside, after the control of the VAR however comes the validation of the goal that unlocks the scoring.

After five minutes from the rosanero advantage, Bari has a very good opportunity to equalize again with Cheddira, his lob from the edge on an assist from Botta is splendid but the conclusion ends just above the crossbar. In full recovery super opportunity for Palermo one step away from doubling: the pinks recover the ball with Floriano who immediately throws Brunori towards the area, the attacker goes in and tries the shot but Pucino makes a providential intervention thwarting the action. The first half of the match, therefore, ends 1-0 for the rosanero team.

The two teams make their entry into the field for the second half, with no change at the start of the second half. Only a minute passes from the start of the hostilities and Bari goes one step on par with Maita who wedges herself in the area and tries to shoot, a super intervention by Pigliacelli who with the recalled hand rejects into a corner from close range.

At minute forty-eight Palermo’s speed restart with Damiani serving as Broh, the latter tries to serve Elia who entered the area but Caprile comes out and anticipates the rosanero striker, preventing a potential scoring opportunity. The hosts try to raise the pace to find the equal network and show up, at minute fifty-three, with Antenucci who tries to reach the goal from the edge but the ball ends up high. A minute later the first change for the cockerels, with Vicari taking the place of Terranova.

In the full balance phase of the match, at minute sixty-five, the swirl of changes of the two technicians begins with the intent of breaking the inertia of the match: between the ranks of Bari outside Botta, Folorunsho and Maita inside Cangiano, Galano, and Mallamo while for Palermo Pierozzi takes the place of Valente.

In the sixty-eight minute, Bari scores the equal goal: Antenucci wins the duel of strength with Damiani from the right side of the penalty area, ball in the small area on which Cheddira enters and scores the 1-1 goal. Immediately after the home team’s goal, it’s time for the cooling break and when hostilities resume, Bari controls the match, galvanized by the goal and under pressure to attempt a counter-overtaking against the squads.

At the eighty-minute new change for Palermo with Floriano leaving the field to make room for Stoppa. Four minutes later Cheddira is launched in speed, the Bari striker jumps in progression Marconi who finds himself forced to have to spread the opponent from the edge of the area initially obtaining the yellow, then after the VAR check the referee corrects the card by extracting the direct red for a foul by the last man. Corini, after the expulsion of his central defender, runs for cover by inserting Lancini in place of Elia.

In the final, with the strength of the extra man, Bari tries to push and at the ninetieth Cheddira finds himself alone again in front of Pigliacelli, the goalkeeper, however, manages to reject the conclusion of the Bari attacker. New substitution, in the meantime, is always for the hosts with Center taking over from Antenucci.

Despite Bari’s attempts to make themselves dangerous to Pigliacelli, the match ends 1-1 at the final whistle with the two teams sharing the stakes.