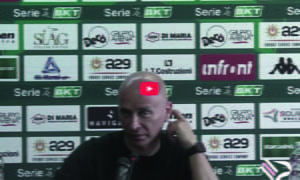 Eugenio Corini, the Palermo coach, spoke at the press conference in view of the match of the day after tomorrow against Bari (8.45 pm) at the San Nicola.

The idea is to raise the level of the rose with 5-6 purchases, I will talk about the new ones when they are made official. In two days we are on the field, for an important game against a team that last year won its group with great Merit. It started well by winning with Verona in the Italian Cup and making a great game with Parma, among the favorites for promotion in A. Mignani has done a great job, they have great enthusiasm and we know about the difficulties we will face. We will put on the field Our things, taking advantage of the enthusiasm of the last game to try to repeat ourselves.

Damiani played a beautiful game, with personality and continuity. He is growing and we keep him in great consideration. Increasing the level of the team should be done not only numerically but also qualitatively. Damiani in a long championship will have the space, his will is to have two players by position.

The company has warned me of a very advanced negotiation but has not yet made official the transfer of Luperini. It was a tactical weapon of extraordinary importance last season but it was just for me that the boy obtained to leave and continue his career in another company. I followed the boy for a single training but I wish him the best because he is a very good boy and was important last season.

In the attack at the moment, we do not miss the players, we are focused on certain roles and we will see if we have the opportunity to work on this too.

I see complicated to bring some of the new ones that can arrive these days, the times are very tight and I don’t believe at this moment that I could take them to Bari.

There are various phases in the game, with Perugia we had control of the important game and in other phases, you prepare yourself to be able to counterattack. Even when we defend the thought is to take the ball and go to goals. We have to start quickly because you find the teams discovered, we work on this. Bari has quality, has important players and we know they have had an important job behind them for more than a year.

At the system level, there is a basic idea, then football is dynamic and on the field, it rotates and moves, overall the base will be that view against Perugia.

The previous match against Bari last year was a particular climate because they celebrated promotion. We saw that game to take some cues from my collaborators

The unavailable are Sala, Devetak, and Accardi. Sala took a blow but I thank him because he remained on the pitch. The knee was very swollen but we are calm, let’s see if we can recover it for the next game. For the role there is Crivello but I am also evaluating more conservative profiles, we are working on it.

I liked the courage of the last game and the desire to play, to try the things in which we worked and for a coach, it is an important thing. Elia is an important player, he made both C and B, and last year he cut out a relevant space in Benevento. He can improve a lot above all to score goals and assist, we try to raise his technical level by trying to put it in the position of growing on these fundamentals

The research is to build the game also from below, we worked on it and the boys are working well. Pigliacelli has important qualities with his feet and knows well when and how to exploit them. Valente can play both on the right and on the left, he is a skilled player and I keep it into consideration for both bands. He is a leg, he is an interesting player. Floriano is a qualitative player, reads the spaces well, and provides filters and for this reason, I inserted him under the tip, against Perugia he did well and gave a big hand on a qualitative level.

The probable formations of Bari – Palermo, 2nd Day Serie B at 20.45