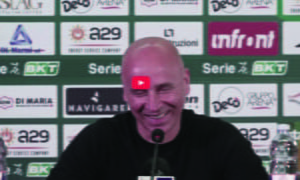 Palermo – Ascoli / Serie B returns to the field for the third day of the championship, with the calendar that sees Palermo engaged tomorrow evening at 20:45 at the “Renzo Barbera” stadium against Ascoli in Bucchi. The rose coach Eugenio Corini spoke, at the press conference, of the challenge that awaits them and the chances of seeing the new arrivals on the pitch from the beginning.

You have to evaluate the time you have available. The market went in appeal, we operated very well but we must take into account the performances of the players who played the first two games. We are reinforcing the staff and I will think in the next few hours what is the right way to insert the new ones.

I still have a workout to do – continued Bagnolo Mella technician on the training theme – the idea is to give continuity. Those who played did very well, the global evaluation is that modern football with the five changes changed certain dynamics, there is a path to be done together, and the overall idea of ​​how I want to develop the team.

The newcomers and the individuals

Corini focused at the conference right on the latest grafts from the market starting from Bettella and Stulac.
The evaluation is all about Bettella and Lancini – said the Rosanero coach in relation to Marconi’s disqualification – who played as a starter last year. We believe in Bettella so much but he didn’t play a lot in the past season. Stulac needs a period of adaptation but has important technical qualities, Damiani has done very well and I have to understand how I have to insert Stulac. We must not expect changes for tomorrow’s match.

After the former Monza defender and the ex-Empoli director was the turn of Di Mariano and Segre: I already know Mariano about Mariano, they are different evaluations compared to Stulac. I know what his qualities of him are but Valente did very well in the first two games. Segre has arrived at the end of the week, had not trained for three days, and needs a path of adaptation, it would be forced to start from the beginning.

The strength of Renzo Barbera and the form

One of the strengths of Palermo is definitely the “Renzo Barbera”, Fortino embedded by 31 games in a row, and also Corini recognizes the importance of playing at home with the warmth of this audience: “Playing at home is very important for us, an extraordinary enthusiasm that we want to food with the search for the result has been created. We want to play an attractive game for our fans, the fact that the public always supports us and accepts the technical or tactical error makes us stronger “.

Modern football is a dynamic game-continues the coach of Bagnolo Mella in relation to the module he will use for the match-where positions are dealt with, everything is built in a certain way and regardless of who will go to the field the 4-3-3 It is not so different from 4-2-3-1. We have created, in the structure of the rose, the way to vary between these two situations will depend a lot on how the strategic preparation of the single game will be. Those who are part of this squad have all the attitudes to play in both systems.

The injured and the individuals

During the press conference Corini took stock of the condition of the injured: Accardi yesterday worked with the ball but still annoys, we will see when he will be able to start working with the team. Devetak is taking the rehabilitation path but it will still take a few weeks to make him return to the group. Sala we preferred to wait before reintegrating it, we hope it can return for the trip to Reggio Calabria. Soleri has returned, he is fine and is recovered.

Just on Soleri, the rosanero coach did not spare himself in considering him an important player for the project: Soleri is very flexible, and taking over was decisive. Modern football is also based on this aspect or on the impact on the current game. He is a player that I definitely take into consideration.

A few words, by the rose coach, also on Mateju about to officially add to the team and the overflowing start of Jeremie Broh: Mateju is an advanced negotiation, we wait for the formalization. I trained him in Brescia, he is a right back but he played with me on the left and he can give us great flexibility. Broh had noticed it with my staff when he was in Padua, last year he made an important championship and we found a player who grew up.

It is pleasant to train it, we found an extra resource, and deserves the space it has found. “

Some space is limiting themselves for some boys – continues Corini about players who do not fall into the technical project and can struggle to find a minute – we have already notified the directly interested in in a loyal way, for me loyalty is important to understand the role you do can occupy the team. It is right that the boys make their evaluations, it is difficult to keep everyone at the same level. There is great opening towards them even if they decide to stay, it is clear, however, that the third or fourth choices in the same role must make their professional evaluations.

Finally, the considerations on the Ascoli of Bucchi could not be missing which, at the moment, has the same number of points as the rose: “Ascoli is strong and has talent, has done very well in the past season by hitting the play-offs. They know how to play football, we know it’s a tough championship and all teams have great quality. Ascoli has a category path, we know it is a tough and quality team. “

Bucchi is a good coach – continues Corini about the Marche coach – makes his teams play well. Trieste last year put Palermo in great difficulty. He was lucky enough to retire and is one more month of work, we know we find a consolidated team.

I always have great respect for colleagues – concludes Bagnolo Mella coach – it is normal for the game to propose your game and take points. We are working well, both during the week and at the corporate level. We must create our identity, there is great synergy with the company and we are completing our team idea with the latest moves. We want to create confidence with the games and performance, we must complete this path to the stop. Attention is now entirely on the Ascoli and we have all the qualities to win this race.