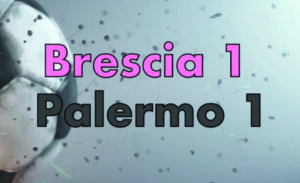 Brescia Palermo 26/12/22: On Boxing Day, Serie B does not stop and takes the field for the last match of this 2022 as well as the first round of the cadet tournament.

Kick-off of the match scheduled for 12:30. The teams enter the pitch wearing black away kits for Palermo, while Brescia will play with their home kit in blue jersey and white shorts.

Kick-off entrusted to the hosts who, in this first half, will attack from right to left. The referee Marinelli whistles the beginning of hostilities: Brescia-Palermo begins.

In the 5th minute Palermo risked a sensational own goal from a free kick in favor of Brescia, with Vido deflecting the ball towards his own goal in the scrum, but Pigliacelli countered with an excellent intervention avoiding the visitors’ advantage.

Balance and liveliness in these first minutes of the match, with both teams very proactive and effective in overcoming the pressure from the opponents.

In the 18th minute, a free-kick for Palermo kicked from the right by Di Mariano, Marconi manages to hit his head in the middle of the penalty area, but the ball is weak and is easy prey for Lezzerini.

In the 24th minute good opportunity for Brescia with Van de Looi who finds a nice through ball in the area for Bianchi, the Rondinelle striker only in front of Pigliacelli, does not get anything on the ball and the rosanero goalkeeper manages to intervene in low exit.

Match blocked, arrived at the half hour of play, at the “Rigamonti” in Brescia where total balance reigns.

Both teams try to build interesting game plots, but the defenses have so far proved to be attentive and effective, with a lot of play but few real goal opportunities.

After a sparkling start to the match, the rhythms, in this first half finale, drastically dropped with Brescia managing a sterile ball possession and Palermo not very precise in the restart.

In the 45th minute, the first yellow card of the match, Brunori booked in the ranks of Palermo for dangerous play on Van de Looi.

After two minutes of added time, the referee Marinelli blows the whistle for the end of the first half: white goals so far at the “Rigamonti” between Brescia and Palermo.

The teams enter the field again, no changes so far by either side. The referee whistles for the resumption of hostilities: the second half begins between Brescia and Palermo at the “Rigamonti” stadium.

Brescia’s 50th goal unlocks the match: counterattack by the hosts with Ndoj serving Galazzi in the area, a shot by the biancoblù player who passes under the legs of a guilty Pigliacelli and enters the net for the advantage of the Rondinelle.

At 52 ‘immediate draw for Palermo! Broh’s cross from the left for Di Mariano, the player from Palermo supports Segre, who heads past Lezzerini for the goal that restores the balance at the “Rigamonti”.

The squad’s reaction was immediate, with the match finding two goals in ten minutes in this second half after a decidedly stingy first half.

In the 60th minute, Brescia was dangerous with a low shot from outside the area by Van de Looi, the ball ending just wide of the post to Pigliacelli’s left.

In the sixty-one-minute double substitution, the first of the match, for the hosts with Benali and Garofalo taking the place of Ndoj and Van de Looi.

Double substitution, in the 68th minute, also for Palermo: Damiani and Vido out, Saric and Floriano in.

The Bosnian midfielder made a good entry into the field who in two minutes has already obtained two free kicks, one of these committed by Bisoli sanctioned with a yellow card.

In the 73rd minute third substitution for Brescia with Bianchi leaving his place to Olzer.

After the two rings at the start of the second half, the match returned to balance again, with a lot of battle in the middle of the field but at a very slow pace and without noteworthy opportunities.

In the 80th minute, Moreo’s bad intervention from behind on Saric, sacrosanct yellow for the Brescia forward and ex rosanero. In the 84th minute, substitution for Brescia, the fourth for the Rondinelle: Galazzi out, Nuamah in.

A final forcing attempt by Palermo in this final match, however, the actions of the squad all stopped near the Brescia penalty area without being able to undermine the defense of the hosts.

After four minutes of added time, the referee Marinelli whistled the end of hostilities: the “Rigamonti” match between Brescia and Palermo ended 1-1, valid for the last day of the first leg of Serie B.