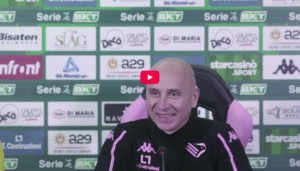 Brescia Palermo 23/12/2022: Corini presents Palermo’s last match of 2022, that of the ‘Boxing Day’ scheduled for Monday 26 December at the ‘Rigamonti’ in Brescia.
The coach takes stock of the situation in the Rosanero home, also with regard to injuries.

Going back to Brescia is special, it’s part of my personal and sporting life. There I experienced strong emotions. I got promoted to Serie A, and we came close to it last year too. I’m happy to go back: against Brescia, it will never be a game like the others.

Objective? We want to finish well, trying to bring home the best possible result. But I’m not biased: you always have to think one match at a time, and we’ll do it in Brescia too.

Relationship with Cellino? Last year, when I decided to end my adventure in Brescia, we talked. It was right for both of us, and we closed well.

I had an important relationship with Cellino, it was a very nice journey: he called me back and told me that the regret was not playing Serie A together. It will remain a great regret for me too. Training at home, which is like in Palermo, is a different responsibility.

On the Brescia championship: He got off to a very good start, he put a lot of hay in the farmhouse. Some of their draws could be victories, when they were leading until the last minute. Aglietti knows him well, he’s good. We have little indication of how they will play, and it’s one more difficulty. Team value is important, I know some guys.

We know the difficulties we are going to encounter. The mentality of my players in training reassures me: we are building this continuity and I want to see the results on the pitch.

On injuries: It was a special week for us. Even today Bettella and Sala differentiated, but tomorrow we plan to reinstate them. With Gomes, we had a huge problem with wisdom tooth pain. He will leave with us, we will try to recover him, but I don’t know if he will be able to start from the start.

Positive results? I never take it personally. The team has gone beyond the difficulties: we have always worked hard.

However, we have to build a championship on it. As for Palermo’s growth, I’m referring to the ten post-Terni matches. Through the difficulties, you consolidate and understand how to be a strong team in such an ambitious square.

We have to be humble: knowing what to do every day in training to then play a great match. We have drawn this line, and must follow it.

The fans are the main part of the club. The fans understand our thoughts through the words in the conference and our performances on the pitch. For us, they are a great incentive.

The watershed was Terni: the last few minutes were terrible. The team was off the field. We did an important job that week, to restart against Pisa: against them, we understood our strength but also what we need to improve, given that they came back from a two-goal lead.

Today we are no longer dead on the pitch, but aware of our growth. It would be very important to close the first round in the best possible way.

Nedelcearu? He has always played as a starter, for us, it is a significant absence. We have to recover Bettella; Marconi has always done well when I called him into question. There are also Lancini and Peretti. I will field the ones I think are most ready to go on the field.

Brunori was charged and enthusiastic after retiring with the national team, he already wanted to train as soon as he got back.

Today he came back and I saw him motivated. This internship made him realize the status he has earned through hard work.

I ask him for more and more responsibility, he must show me this continuous growth, pushing more and more. He has already grown a lot, but he still has margins.

Stulac had a great game. I always knew what he could give me, I always stimulated him. It was important that he played these two games very well. With Cagliari, I liked his anger in the tackles. I’m very happy: but it’s a starting point, we have to add something more.

I’m happy for Saric too, he entered calmly, and he did what he knows how to do. Will he replace Gomes? I still have to evaluate: the ballot with Broh, for now, is 50 and 50 “.

How did we prepare for Christmas? We did a group thing yesterday, we exchanged greetings: a correct thing in my opinion, because it creates sharing and empathy.

But now, after training this morning, we are in the game. It’s a great sacrifice, it’s rewarding, and we have to work to make the fans proud.

Finally, coach Corini wishes a happy new year to the fans and the press.