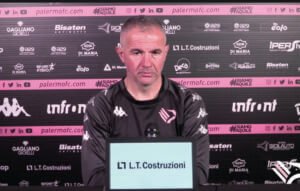 Coach Filippi before the 17th match against Monopoli

Palermo wants to get up with Monopoli. After the bitter defeat at Picerno on the pitch, the rosanero are ready to face the green-and-whites from Puglia in the big match of the seventeenth day of group C of the Serie C championship.

“We are aware of our mistakes” – he observes – but also of having faced the match against Picerno with the right spirit. We’ve been too frantic in some gameplay. It’s gone now. The head is at Monopoli. We worked on our mistakes. We are aware that we are playing against a team that has now entered the leading group.

He said it with numbers. A strong, square team that knows how to play football. We need the best Palermo to score points tomorrow.

“I look at my team” The rosanero coach continues, replying to those who had quoted the words of Colombo – Monopoli coach – on the possible pressure due to the fact of being Palermo. “I’m used – he says – to play to win and go as far as possible. My team has to do that too. We set no limits. I’m not used to talking about others and about others in the house.

“We must not let ourselves be seized by the frenzy” On a tactical level, Filippi wants intensity from his men on the pitch from the start. But he warns against the risks of haste. “You have to play with very high intensity – he says – we usually do it, but we must not fall into the trap of frenzy because we could show our side to a team that has its best weapon in the restarts as well as knowing how to play, know how to set and offend.

We have to be good at working as we prepared for the match during the week, to find the way to the goal with a lot of cunning, patience and desire ”. “Opponent We Know” Palermo-Monopoli-Cup-Italy-C Monopoli was beaten in the Italian Cup on 15 September. It ended 2-1 for the rosanero who passed the round reaching the round of 16. Filippi spoke of the importance of knowing the Apulians well.

“He is an opponent we already know – he explains – we know how he plays, so it is an advantage for us, for the boys, to know the opponent in detail. Precisely for this, we must be careful. It is true that we beat him in the Italian Cup but also tomorrow it will be a difficult match ”.

And he continues: “In any case, the interpretation is what counts: we coped well with that game even though we complicated our lives due to inattention. We have to play as we know-how. I believe that we will be able to take away some satisfaction “.

Tomorrow we will decide who to play. There is also Peretti. We have all the solutions to be able to field a super competitive formation “. An important but not yet decisive challenge Filippi continued talking about the importance of this challenge but also in general about the commitments that the calendar also offers for the other top-ranking teams. “This – he says – is an important match between the third and second in the standings, then the first meets the fourth.

There are starting to be cross-comparisons that can delineate the ranking more than necessary. Not that it is decisive, but it can begin to give a strong meaning to the ranking. Both ours and that of Monday between Bari and Avellino, as well as that of Turris (engaged in Potenza). We have to play as we know-how. If we do, we can get great satisfaction out of here

The rosanero club announced the list of Palermo players called up for tomorrow’s match, 5 December, against Monopoli: