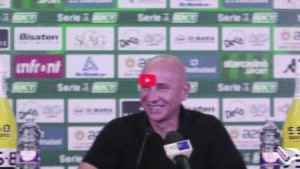 Frosinone vs Palermo: “We are ready but we do not load this challenge too much” Serie B, the coach is looking for confirmation after the victory with Genoa

In Frosinone to do well, to confirm the improvements seen with Genoa, and to continue moving the ranking. And why not, also to find a rematch from that famous final of the playoffs four years ago although the coach does not want to hear about revenge. Eugenio Corini presents the match against Palermo which on Saturday 17 September at 2 pm will be played at the Stirpe for the sixth first leg of the Serie B championship. Read Also: Dario Saric to push Palermo up, “I want to establish myself and Serie A”

These are the first words of the rosanero coach to present the challenge. “It is certainly an important match, we had to approach Genoa in a certain way. We need to have that approach, that competitive nastiness that made the difference. Of course, we need to improve a lot in all respects. I expect the approach to be as important as the one with Genoa. I talked about emotional control and so it has to be ”.

Frosinone-Palermo will also experience the challenge in the challenge between the two coaches on the bench. A long-distance duel between two former Palermo teammates in the heyday, Eugenio Corini will face his friend and colleague Fabio Grosso. “With Fabio (Grosso, ed) we shared extraordinary moments. I remember his first training. He was excited and there were 7,000 people at a friendly match. An exceptional guy, good, polite, and professional. We don’t meet often but it is always a pleasure to find him also as a colleague. I had the opportunity to face Fabio when he was in Bari and in… when I was coaching Novara and then Brescia ”.

The rosanero coach talks about the consolidation work carried out here and the things to be perfected. “The work must lead to technical-tactical improvements – observes Corini – then there is the ability to read the games in progress and we are working in this direction. We analyzed the Reggio match. I often say let’s not forget the starting point. The reaction will be important and I want to consolidate improvements on certain things. I don’t want to back down. Sometimes the reading of the game and the inertia are read in one way but it needs to be improved “.

The 4-3-3 coined by Corini is still in its infancy. Palermo has played two games with this form so far, a heavy defeat in Reggio Calabria and a painful but deserved victory against Genoa at home. “We are at the dawn of a tactical project – underlines Corini -. What I have seen in some parts of Reggio Calabria will seem strange to you, but they have been good. With Genoa, further improvement on how we consolidate possession on opponents’ rebounds and other situations. The level must always be raised. We have done typical weeks that have allowed us to make some important points. Now we have a two-week break before Sudtirol ”. Palermo in Manchester “I asked for this mini-retreat” Manchester’s Ethiad Campus, Palermo will have a four-day retreat

The Palermo coach talks about the genesis of the idea of ​​this mini-retreat in Manchester which will see the Sicilian team play a four-day interlude from 20 to 24 September at the training center of the “mother” team of the City Group family. It all started almost when the coach arrived in the Rosanero capital.

“Three weeks ago I asked for this mini-retreat in Manchester – he said – something less stressful than the typical week. I thank the property that allows us to go to Manchester to offer the possibility of this mini-retreat and to do it in the conditions that every coach dreams of. This period is important to get to know a player further. The genesis – he continued – was simple: I arrived and after three hours we had the match against Perugia. Peace of mind was needed. There was also the transfer market underway and then 7 new players arrived and a total of 14-15 players. So I asked for this opportunity to get to know each other better both with each other and with me. Talking directly with them is certainly useful and allows me to develop many things and have objective parameters to better develop our path ”.

And he concluded: “I know that the company is working on its own sports center. It will be a big step towards growth. Having your own center creates the culture of the club and a home for the youth ”. “Challenge against Frosinone like the others, don’t be overloaded”

Eugenio Corini focused on the increasingly imminent match against Frosinone. But he wanted to dampen any other meaning beyond the intrinsic one of the challenge that evokes bad memories and many, too many balls on the pitch.

“I understood that this match is important for you – he says – but certain things should not be overloaded. All matches must be prepared in the same way. My approach to the game and to charge the guys to find the result is the same. If the result comes I will be happy. My approach will not change. Regardless of the history of the challenge, we always prepare ourselves to do well ”.
The Palermitans Di Mariano and Crivello

In the presentation conference at the Barbera, there was also talk of Palermo in pink, Di Mariano, and Crivello.

Corini said: “Di Mariano is fine, he trained well with Lecce, with Genoa the goal from Brunori is propitious, he went close to the net, he is applying himself well. Crivello is working, I have 29 players, I don’t leave anyone behind ”.

And in conclusion on Saric and others: “Saric is a complete player. Sometimes he has made the forward midfielder in his form of him. In my opinion, he is 60% of his form. When you train and you don’t know if you will stay on that team, it is normal that you will inevitably not be at your best. I have seen good things and things that can improve. Gomes is very smart. Bettella is back, Sala has recovered for two weeks but I have to take into account the performance of those who did well with Genoa ”.