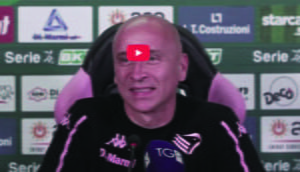 Modena Palermo 28/10/22: In Modena without Elia but still with the desire to change the season. Eugenio Corini speaks on the eve of the championship trip to the Braglia, a match in which the pinks arrive with a streak of 5 games without a win.

Elijah’s injury? Firstly, there is human sorrow, he was doing very well. We tried to see if there was the opportunity of conservative therapies, but it was not possible. He is a very good boy and will have a bright career, his importance is there for all to see. But we still have solutions in pink to make up for the absence of him.

Marwood’s visit? It is cyclical, it was a wonderful meeting (even at dinner) we discussed many things, a very important confrontation. They are aware of the difficulties we are facing, but also of the work we are doing.

A decisive trip to Modena? I’m not sure what you want to ask, we always prepare the game to achieve a result. Strategic Elijah? Obviously yes, but we can also play different situations that we prepared during the week, in order to have more solutions.

I think that a team, a team, are constantly evolving. I think Broh and Saric have similar attitudes, Stulac maybe has more qualities… But I am also very careful to find an emotional reaction in the team, I try to field the kind of game that I think the team can give. Devetak? You know the path that has limited him a bit, I think he has combined well with his teammates: it is an option for tomorrow.

Cittadella? I have seen it in one way, someone may have seen it in another way. Today I repeat: I have seen certain things and want to play the game. The team tried to win with the Citadel; if you do 0-0 obviously you see the negative aspects. I know, it can fit. I respect the fans, I know they will be numerous tomorrow.

They must know that on my part there is always the will to bring them satisfaction. They are not happy, and we know this, we understand the disappointment.

I know this stadium well, the protagonists are always players and coach. If things go well, the team accepts the verdict of the fans. We have to accept it. We are in the relegation zone, and it is normal to be disappointed. There are aspects to improve, but also positive aspects. It is a continuous work. Elijah? With Marwood we still did not know the outcome, then we had the feedback: we must try to do the best possible and then evaluate in view of the market.

Talking about football is always a pleasure, we always work on data. And the figures show that we are fifth in the league to play from behind and ninth for offensive ball possession. We need to improve on effectiveness, but the desire to play is there. We are creating the conditions, then it is clear that if you draw you have to accept the criticisms. But there is objective feedback on the opportunities created.

Modena is a very qualitative team, with offensive players and with an important attack potential, very good on inactive balls (the match against Como is the proof of this). We have identified situations in which to try to harm them: we have prepared ourselves best to do so.

Stulac? He is working very well, and I think he is growing in terms of condition, aware that he has to work to raise the level. He is doing it. Not only that, but he is a boy who wants to do and give. All together we are trying to grow: I generally give the training at some point, now I’m not doing it because of some doubts. But this is because everyone is working at their best.

The ranking? All the criticisms must be listened to, and the ranking accentuates everything. The ranking is very short, it is up to us to recover positions by scoring points. Am I seeing Brunori? Holding a certain type of system for 95 minutes is perhaps complicated for us right now. It is certainly an opportunity.

But I remember that Brunori is third for shots on goal, he made 3 winning assists and another 4 could have been goals. We are creating a prerequisite for scoring goals, and the numbers objectively say that his teammates are close to him on the pitch.

A cumbersome maneuver? It is an evaluation that I respect. I accept anything (especially at this moment), but I reiterate that there is a value and there is an idea, which we are pursuing. The improvements are not yet seen, but we are working on it. Even dribbling is useful in order to be incisive in the goal area.