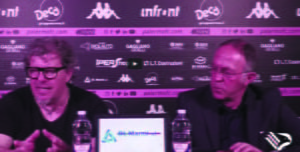 Mr.Nardini, Conference before the match against Taranto

Baldini is positive at Covid – announces sporting director Renzo Castagnini -. Nardini will speak instead of him.

The team has always faced matches with a winning mentality. Then there are moments like this where you draw three games against low-ranking teams. We have to go back to the team that scored 5 goals, but there are also the opponents. Let’s not forget that Andria drew in Bari.

Aren’t there fixed 11? Baldini considers them all owners, then it is obvious that those like Brunori are difficult to replace, while the others are all at the same level. I don’t think the coach changes solutions because he wants to shoot himself in the foot. With Carrarese we reached the playoff semifinal, Palermo is obviously a more important place. Whoever goes on the pitch must demonstrate something more, it is different from other squares.

The guys we hired in January didn’t do what we expected, but let’s do the accounts at the end. Let’s play the playoffs in an important way and then we’ll see.

Nardini: We have a fantastic group, against Fidelis, Potenza, and Paganese we started to do the same performance as Avellino, then there were some unexpected events. We are a team aware of our strengths. The boys work hard. For us, a new championship is now starting to reach the playoffs in the best possible way.

Castagnini: Keep Brunori for next season? It is premature to talk about it, we are planning to finish the season in the best possible way.

Nardini: I don’t think the team has lost enthusiasm. However, it happens that in the final stages of the championship that high self-esteem can also go against us. In these last three games, we have had some negative episodes.

Castagnini: The ranking tells us that we are a bit late, I expected we could do better. From some players, I expected something more, but they are guys who are committed and I am convinced that those who have done less can take away from us some satisfaction. The end of the season can give them a hand.

Nardini: The boys talk to each other, they help each other on the pitch. The quality level of the training is quite high. We show from the first minute that we play at home in Palermo and that we are strong. We must be the ones from three games ago.

Castagnini: We didn’t think we were sixth in the standings, but we were a little further ahead. Errors? In football, everyone can do them, sorry that two important players for this team who have been reinstated with merit with Baldini have made them. But we don’t have it with anyone in particular. Young? It would be unfair of us to condemn them.

Castagnini: January market? Difficult to take who has played on a permanent basis. Of the two signings, we already knew one because he played with us, the other had won a championship.

Castagnini: Prosecutors? If we spend on them as was done in the case of Lucca, it means that they are money well spent.

VIDEO / Conference before the match against Taranto

Probable Formations / Conference before the match against Taranto