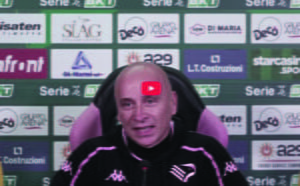 Palermo Como 07/12/2022: After two defeats in a row, the squad returned to success in the away match against Benevento, with the rosanero coach now looking for continuity in a new direct match for salvation.

Two days after the last game there is always something to check – Corini began – we are confident in recovering some players who came out a little bruised.

I want to go into two or three situations before drawing up the squad. The Benevento match left us with positive feelings for how we approached it. We held up well emotionally, playing a game of substance and quality born of a journey that started from afar.

The Bagnolo Mella coach then spoke about Como, an opponent in difficulty and in the middle of the relegation zone: Como is an important team, they had some difficulties with coach Gattuso to whom I send my best wishes, I have known him well since Novara and I have a lot of respect for him.

They work on a 4-3-1-2, have a dribbling and insertion midfield and come from a couple of useful results. We are aware of a tough opponent, as everyone in this category is, but we are also aware of what we are becoming with each passing day.

Corini, during the press conference, spoke about the conditions of Saric, Stulac and Vido and the possibility of seeing them on the pitch from the first minute given the tour de force with many close matches: Saric was finding condition but was conditioned by the injury.

I’ve seen him well since Monday, it’s an option and I reserve two training sessions to see if he can start from the start or while the match is in progress. Vido had a problem before Venice, he returned to the group and when he entered Benevento he did well, he can also give us a lot and can start from the beginning.

Stulac is training well, but at the moment Gomes has grown a lot on a strategic level and I find it more difficult to move Gomes rather than exploiting Stulac’s strength. His value is out of the question, but Gomes is giving me a lot in that position and is currently penalized by his explosion.

We often approach a midfielder who becomes an added attacking midfielder at the strikers – continues the Rosanero coach – Saric has the characteristics to develop this type of game. I understand that for everyone, especially for the fans, continuity is only linked to the result, but we have always taken the races to the limit to get results, this championship thrives on balance for everyone and the extremely short rankings say it.

We must accelerate the process of individual and collective growth. Sala is perfectly eligible for tomorrow’s challenge. Damiani was a tactical choice, he hadn’t played for a long time but replacing him is linked to the fact that I wanted more physicality in the midfield, which is why I added Broh.

During the conference, the coach of the squad reflected on the starting point of his Palermo, retracing the stages of building the team and the game: Many times the starting point is forgotten. We have to remember how we started, with a week to prepare for the first game in place of a resigning coach.

We worked to put everyone in the same physical conditions, and it was very difficult, in the meantime we tried to implement a tactical system that didn’t work at the time, and we decided to change because a coach must also understand the characteristics of his own players.

This team has room for growth – continues Corini – but we need to understand what this Palermo is trying to do. Ours is not just a random restart, behind it there is a precise work studied scrupulously. I’m here to bring Palermo to reach the set goal. This square deserves to go where it deserves, but I can’t go beyond the dream of playing tomorrow and winning because that’s my job.

Two games are enough to go into difficulty, so we need to be concrete, realistic and effective in the answers we have to give.

The coach from Bagnolo Mella continued talking about the extremely short standings a few days before the halfway point of the tournament: Usually at this point in the championship two-three teams have fewer points than the others but this year the gap is incredibly close.

The ranking is crushed, and this makes the championship indecipherable. These three matches certainly give a certain acceleration and unpredictability, we have to take it in our favor because we can make a big leap. We have to see how the break will arrive, the market in B has always changed some balance, and we are working to do our best in this final phase of the first leg

Corini, during the conference, returned to talk about Damiani’s performance in Benevento, on the pitch from the first minute after a long time: For this match I will make more tactical assessments than energy recovery, for the third match instead we will also reflect on the conditions’ player physiques. I congratulate Damiani because he came back after so much good, playing a good game.

I see him as a player able to speed up the game, he deserved the space from the first minute in Benevento, and I’m happy when those called into question respond as he did.

In Benevento, we struggled in the first fifteen minutes – continued the pink coach – then we worked well up to the last third of the pitch, but we lacked something near the area.

Sometimes there is some wrong reading of ours and other times the skill of the opponents. Then mental freedom comes into play, if Brunori hadn’t scored he wouldn’t have invented the shot from midfield that was about to become a goal.

Corini concluded, given the return to the pitch at the “Barbera”, speaking of the fans and their desire to see performance and results: We know that the Palermo crowd is demanding, the performances have always been there but the result things moods. We know what we have to do, we have to put everything on the field and then accept the reaction of the fans.