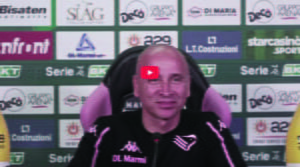 Palermo Parma 04/11/22: The rosanero coach intervenes in the press conference to talk about the important match against the Parma, which could be useful for the rosanero to give a feeling of continuity after the victory in Modena.

I took 25 players to retire, two more than usual as a precaution. Di Mariano did the complete finishing. Gomes had cramps in Modena, but he too has completed the finish. Buttaro also returned after the problems in Modena.

The away win? We have given continuity to the draws at home, there are still many things we need to work on. We cannot and must not abandon the attitude we had after Terni.

It is an extra-balanced championship. Time helps a coach, the players are constantly evolving, I think that from this point of view we have created an excellent balance, we needed results and we made them. I expect continued growth in all respects

Parma is a strong team and have a complete squad, the coach is very good and has done a great job. We have a tactical structure, but in every match there are some tricks based on the opponent.

Football is made up of the heart and the belly, and then you have to connect the head. In Pisa there was a turning point, which came after the 30 minutes of Terni which were objectively disgraceful

Damiani and Soleri? I have a very large squad, good or bad, everyone has played. I have a high regard for Damiani, I follow him a lot, he has a great mentality.

Furthermore, I like Soleri for his generosity combined with his technical ability. The players must always prepare themselves as good as possible, the example is Crivello.

If you don’t prepare well when it’s not your turn, you won’t be ready. Crivello gave a great answer, which must be an example.

Against Pisa, we also built well from below, with the Cittadella we had a different strategy. In Modena, we dribbled very well, we have to work to be more incisive. We are also looking for a quick counterattack, we are working well in that respect

On finalization, we are improving. The data in Terni were terrifying, from Pisa onwards we are growing. The cramps of Gomes and Valente? The first was very generous, the second is 60/70 minutes at the most, in the long run it can struggle due to its morphology

Vazquez is an ultra-qualitative player, he can play attacking midfielder but also midfielder. His position will not change our game plan. If he plays further back, maybe it’s better for us

The victory in Modena brought joy, the efforts were rewarded with three points. We know the difficulties we have had, we need to come out more solid and stronger without forgetting what it took to get out of it.

When we touched the 4 – 3 with Pisa I realized that this team has character, undergoing the 3 – 3 we could suffer a backlash

122 years of Palermo? Celebrate your birthday worthily with a victory. We got the boos from the fans, now let’s get the applause

Vazquez was valued by Iachini, he grew up in a difficult moment and showed what he is. He is like Lamberto Zauli? They look so much alike, they have raised the level and the technical level of Palermo.

Underestimate Parma for defections? Absolutely no