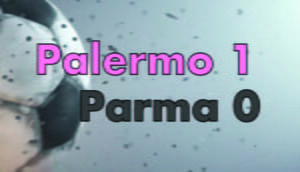 Palermo Parma, 05/11/2022: Having left the lower zone of the standings, the team led by Eugenio Corini wants to exploit the “Barbera” effect to achieve their second consecutive triumph in the championship.

Kick-off scheduled at 4.15 pm. The teams enter the field and after the usual greetings the first ball is given to the rosanero who attack from right to left in pink jersey and black shorts; guests in a yellow shirt with blue stripes and yellow shorts. The referee blows his whistle, the “Barbera” match begins.

At minute 8, after some study phases, Bonny becomes dangerous in the opponent’s area by recovering the ball from the right lane and aiming for Nedelcearu who cannot be overcome; the conclusion of the number 13 of the ducali is rejected in a corner kick. In the following minutes, it is Parma that continues to attack, binding the rosanero team in the defensive phase that holds up the blows of the opponents and tries to hurt on the counterattack.

At 22 ′ Tutino receives the ball from Sohm who jumps Devetak with ease and kicks into the goal by engaging Pigliacelli in a super parade; Parma’s number 11 was still offside and the action was stopped by the match director. After two minutes Marconi sees Broh vertically, who enters the opponent’s penalty area and looks for Brunori in the middle; the number 9 of the rosanero recovers the ball from a tight angle and leans on Valente who kicks into the goal blocked by the opposing defense, then Gomes shoots high.

At 27 ‘still dangerous Palermo in the restart with a ball widened in the left lane for Di Mariano who finds Brunori in the penalty area. The Palermo captain tries a dig in the running to overtake Corvi, but the ball is not accurate and ends up on the bottom.

Minute 32, Valente tries to cross into the area on the development of a corner kick, the pass becomes a dangerous shot that goes off just above the goal defended by Corvi. A few moments later, the rosanero continue to attack and Mateju tries a conclusion from outside the area in the 39th minute that the Parma goalkeeper saves in two halves. Three minutes later it is still Pigliacelli who becomes the protagonist with a save on Sohm’s insertion almost on the bottom line. Almost at the end of the first 45 minutes of play Vazquez serves Tutino as a heel that flies towards Pigliacelli’s goal, Mateju is however lucid and with his diagonal closes the insertion of the ducal number 11.

This action ends the first half with just one minute of recovery.

The teams return to the pitch, in the second half they beat Parma. The second half of the match begins. It starts to rain intensely during the second half, while the two teams continue to seek the way of the goal with various offensive actions. At 58 ‘the goal of Palermo’s advantage arrives!

Valente recovers the ball after a cross from a corner kick, the number 30 of the rosanero finds Marconi in the area who heads off undisturbed and puts the 1-0 ball in! Following Mr. Pecchia makes three substitutions to give a shock to him: Tutino, Sohm and Juric leave the field, giving way to Sits, Benedyczak and Camara. The ducal raise the pace and look for the equalizer, Corini’s team defends well and keeps the result ahead.

At 71 ‘Del Prato’s header that touches the pole to the left of Pigliacelli.

At 74 ‘another change for Parma, inside Zagaratis and outside Bonny. Afterwards, Palermo also made some substitutions, Di Mariano and Valente came out and gave way to Vido and Bettella. The last minutes of the match saw an aggressive Parma and looking for an equal goal, but Palermo ended well in the defensive phase, containing the plays of Fabio Pecchia’s team.

In the 86th minute, Mr. Corini sent Soleri to replace Brunori, who gave up the captain’s armband to Marconi. At the end of the 90 minutes of regulation the fourth official shows the luminous scoreboard, there will be 5 minutes of recovery.

At 92 ‘Oosterwolde’s dangerous shot from outside the area, deflected by Bettella’s intervention. On the developments of the corner also Zagaratis comes to a close conclusion but does not hit Pigliacelli’s goal. Nothing done in the final moments of the match, the referee blows his whistle three times once the extra time has run out. Palermo-Parma ends 1-0.