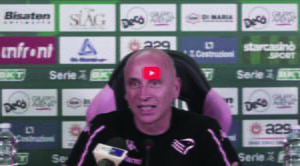 Palermo Pisa 14/10/22: We have always felt the closeness of society, it is a daily trust. We are all working hard to get out of this situation made difficult after the last few games. There is awareness of the path we have to face, there are difficulties and we are working to overcome them.

The defeat against Sudtirol led to mental aftermath – continues the rosanero coach – then in Terni, we were unable to withstand the pressure after conceding the goal. I expected growth in awareness, the mental situation has a certain specific weight and the team must try to find strength by shifting the inertia of the game to its side, at this moment if we go under we cannot recover. We are working on a motivational level, and also speaking individually with the students. We want to achieve a result because it would fuel self-esteem, in Terni we suffered too much from the disadvantage, and the answers I was expecting did not arrive.

During the conference Corini shed some light on the tactical line-up that will be the now usual 4-3-3 even against Pisa: Our game system is clear, then it must be modulated based on many factors. We are always the architects of what we have to do, and the criticisms of the fans must be accepted. We have to react and put everything we have, we have the strength to do it and people will appreciate it when they see it. You must never lose the soul of a team, when we put in what it takes to have a soul the level will rise. We will face a strong opponent who has changed coach, we will have to play an aggressive game.

We have three left-handed left-footed full-backs – continued the coach regarding the choices on the left-handed lane – Sala had a muscle problem, Devetak has not played since May and has not yet been in complete condition, on Crivello I made a technical choice, and yes is stopped in recent days due to injury. To date, the choice that can give me more solidity is Mateju who is adapted but at the moment he is the one that gives me more certainty having already trained him in Brescia in that role.

The difficulty of the rosanero moment also came out in the press conference, with Corini who vented his desire to do well and to get out of this negative phase with the press: My week was one of great concentration and dedication. I said what I thought about the team and the answers I wanted to have and we worked intensely on the pitch. I showed the team a video to set some key points, a documentary in which Kobe Bryant talks about the Olympics victory and how you have to get dirty and give everything for the team to win.

When I got the mental shock at twenty-eight, I became a beast. Everyone is their own leader – continues the coach from Bagnolo Mella – we started in a very special situation and we immediately said that this team aims to save itself. Surely this team will be saved but now we have to give answers, show a reaction and raise our level more and more. It is right for the coach to take criticism, I know I am in the right place but today we need to know who we are. Every training session I see who gets up and fights and I want to see him again tomorrow.

When you have a vision and perceive where you want to go – continues Corini – then you have to lean on the reality where the results are needed. When every day I push my players under stress I want to understand who is holding up the pressure and this aspect trains, me every day. Mental intensity leads to better football and solidarity. As a player before I was only thinking about making the right pass, I made a lot of mistakes and I took a lot of punches but I always tried to improve myself and that’s what I want to see from my players too.

I don’t feel represented by what I saw in Terni but I’m responsible for it, you have to know how to stay inside the difficulties. With Pisa we have to play a game without fear – continues the rosanero coach – I can’t say that we will win tomorrow but we will play that hell of a match. The 5-0 this summer has determined many things and now I’m trying to put the pieces into it. Today the goal is to bring home the loaf, to be humble, and even if we are Palermo we have to fight for salvation.

Corini then expressed himself on the concept of team identity: When I arrived, the emotional reaction was felt against Perugia and Bari. Then, however, a championship is not made up of a game done well, for some players everything seems easy after a victory. but when you lose you need constant growth. When there is no identity built over time, you can’t think of fixing everything right away and I can’t expect it from whoever has arrived. Deep and intense work has been done, and the match that represents Palermo is the one against Genoa. We have to make sure that people accompany us but we have to deserve it.

Regardless of who I choose – continues the coach – for me, they are all owners, there are moments in the season but they are all strong and important. I have to find the right balance, I never budge anyone but I make choices. I am there and I am always loyal to my players, I make technical choices and whoever is on the bench when called must push hard.

A look also at the next opponent, Pisa, who recently called back the coach of last season to try to rise from the slums of the standings: D’Angelo did very well in Pisa, he is new so to speak. They have achieved important results in the last few races, they are part of a path already started last season and which touched the Serie A. It is as if they had restarted a path that ended a few months ago.

Di Mariano is working well – continued Corini regarding the Palermo winger – he has talent but he has to think about racing and pedaling as he is doing, the talent will come later. The search for a goal is one of the thousand problems listed, we have to find that goal that changes the inertia of the game but we have to catch it, there are some difficulties in being dangerous.

Finally, the conference ended with a consideration regarding the young Pierozzi, excluded from the squad for two consecutive races: Pierozzi in the first two starts I put in the race in progress, at the moment his exclusion is a technical choice compared to the current evolution of the squad. He has room for improvement but at the moment I am making technical choices and they are my responsibility.

Palermo Pisa, Feliciano is the referee

Ermanno Feliciani will be the referee of Palermo-Pisa, a match valid for the 9th matchday of Serie B. His line assistants will be Pagnotta and Ricci. Fourth man, Gemini. At the Var there is Dionisi, the assistant Var is Lombardo.