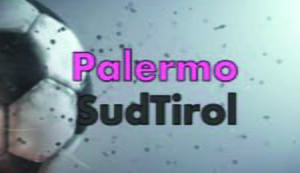 The first challenge in football history was between Palermo Südtirol at the “Renzo Barbera”. The team of Eugenio Corini challenges Mr. Bisoli on the seventh day of the Serie B championship.

Kick-off is scheduled at 14.00. The first ball is entrusted to the visiting team, which attacks from left to right in a white suit; Palermo, on the other hand, takes the field with a pink jersey and black shorts. The referee blows his whistle, and the “Barbera” match begins. Floriano at 3 ‘engages Poluzzi with a shot from outside the area, the goalkeeper sends the treacherous conclusion for a corner. In the following minutes, the teams study each other trying to find the ideal spaces to be able to hurt.

At 16′ free kick for Palermo from the edge of the penalty area after an excellent insertion by Elia sent to the ground irregularly by Masiello; on the ball goes Stulac who kicks but hits the barrier. On the development of the action, a counterattack by Südtirol starts which can become dangerous but is contained by the rosanero defense. Minute number 20, the visiting team takes the lead! Pigliacelli tries the long postponement but finds Odogwu in the same direction who scores the goal of the advantage of the Bisoli team.

Palermo tries to react after the goal is conceded but fails to build offensive actions that can be dangerous for the opponent’s defense department. Elia at 35 ‘tries the conclusion on the fly from outside the area, the ball does not center the goal defended by Poluzzi. Three minutes later Mazzocchi tries to make himself dangerous with an insertion on the muffled conclusion of his partner, but Pigliacelli is ready and saves the shot.

At 42′ Stulac serves in the Brunori area with a lob that puts the number 9 of Palermo only in front of the door: the rosanero center forward kicks on the fly with the left-handed but the ball ends up high over the crossbar. A couple of minutes later, Pompetti’s dangerous shot from outside the area touches the post to Pigliacelli’s left. At the end of the two minutes of recovery, the referee sends everyone to the locker room. The first half of Palermo-Südtirol ends 0-1.

Before the start of the second half, Mr. Corini made three changes: Buttaro, Stulac, and Floriano left, giving way to Sala, Damiani, and Soleri. The visiting technician Bisoli also made a change, inside Rover in place of Casiraghi. Immediately after the match director whistles at the start of the second half. A few seconds pass and Elia fits in between two opposing defenders and falls into the penalty area, the referee whistles the penalty!

Immediately after, however, the communication from the VAR arrives to review the intervention: an on-field review for the match director who, after reviewing the action, cancels the penalty kick. Elia was not touched by the opposing defender. At 52′ there are other substitutions for Südtirol: Berra and Pompetti leave, Schiavone and D’Orazio enter. After a round of hands, Palermo hit the crossbar after a cross by Di Mariano was deflected by Soleri’s head.

At 57′ Rover overtakes Mateju in the penalty area and tries to kick diagonally from close range, Pigliacelli is reactive and para. The rosanero, from the start of the second half, increased their pace in search of the equalizer. At 63′ Carretta enters the field in place of Belardinelli, stopped by cramps. Five minutes later Valente enters the field instead of Marconi.

Palermo continues to push in the offensive phase in search of the equalizer. In the 80th minute, Segre scored favored by a rebound, but his position was irregular and the goal was canceled. Two minutes later Bisoli sent Curto in place of Mazzocchi. Mister Corini instead replaces Elia with Vido. The race gets nervous in the last minutes of the game before the 90′. The rosanero are looking for a goal that is worth 1-1 but they can’t make themselves dangerous enough. Südtirol defends itself well and tries in every way to gain minutes to run the clock.

The fourth official shows the luminous scoreboard, there will be five minutes of injury time. At 93′ Palermo struck a series of occasions one after the other. It all starts with a conclusion by Vido from outside the area that Poluzzi rejects with difficulty, Di Mariano arrives on the counter and hits the post. Immediately after the rosanero try to worry the opposing goalkeeper with several crosses and different conclusions walled in every possible way by the opposing defense. After five minutes of recovery, the referee blows his whistle three times, and Palermo-Südtirol ends 0-1.