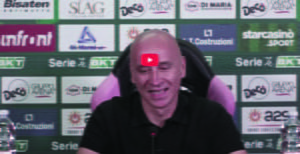 06/10/22: Ternana Palermo: I spoke to the boys – said coach Rosanero – the defeat with Sudtirol was a huge disappointment for everyone because we had many expectations and as we had prepared we wanted a different result. It was not a very brilliant race but we didn’t deserve to lose, we understood the mistakes we made and I see in everyone a great desire to react and improve. We have lost too many games, we must find the right resources to take what we want from the Terni challenge.

The next opponent of Palermo will be Ternana, back from three consecutive victories and in an excellent moment of form: With Ternana I see many points of contact with our path. Last year he was newly promoted after dominating the Serie C championship, he had difficulties and recovered obtaining peaceful salvation, and is now consolidating what has been done in the past season. We face a team that has won the last three races, is very solid defensively and is doing well in a quick counterattack and inactive balls. It is an important team and is demonstrating it.

I first had different expectations with Sudtirol – says Corini, returning to the disappointment of the last match and on the growing growth – we must learn a lot and I don’t want to burn myself to anything. Right now, changing the inertia of the races becomes fundamental, you have to be more incisive when there is the possibility of scoring. We have improved the defensive phase but we still have to optimize the offensive one to score goals and take the game on the right track. Building it takes time, I knew that we would have had difficulty and this is a delicate moment, it is up to us to react with determination and character that we are not lacking and that we will put on the field in Terni.

After insisting for several games with the 4-3-3 Corini, against Sudtirol, he returned to the “old” 4-2-3-1, however pointing out how in the interpretation he was different from that of his predecessor: the 4-2-3-1 that I proposed is different from what was in the past. 4-2-3-1 and 4-3-3 are complementary systems because a ‘mezzala’ can advance on the trocar by proposing something similar. The exteriors in both modules remain the same, against South Tyrolers only Floriano has changed that I inserted because I saw Saric very tired and I wanted a qualitative player in the middle. The team trains and is able to present both solutions.

The purchases arrived with different paths – continues the coach of Bagnolo Mella regarding the disappointing performance of the players who arrived in the summer – we knew we had to do a particular job to put everyone in optimal conditions. I also had many expectations but these ups and downs are conditioning, overall the condition of all is leveling and now we have to make the result. There is a margin for improvement, I understand that it is difficult to see it when the team loses but we are working to increase the general level even more.

One of the problems that emerged in the last races of Palermo is the little precision in front of the door, a fundamental on which Corini expressed himself at the press conference: We often kick towards the door but we do not take it many times compared to the attempts we make. There is a mental psychological component, we are working with a whole series of activities to put the players in the right conditions of pulling towards the door. We must make it seem natural as it should be, without creating psychological overload.

In the last few days, the criticisms against the work of the technician by the fans disappointed by the results so far not convincing so far: The criticisms are part of the trade, we coaches are always objectors of sometimes constructive and little others are not lacking. understandable but are part of the game. I know what this job means and certain responsibilities must take on the coach. I work with passion and I put everything into myself, there is no problem with receiving criticism.

Corini, at the press conference, wanted to clarify the objectives of Palermo for this season confirming how the team has not focused on salvation but on a consolidation path: We have not focused on salvation. Ternana won the C championship and last year at the beginning of the tournament it had difficulty. We always work to try to win, and the values ​​will emerge although it is difficult to understand them right now I see these values. We are an excellent team and we will be able to consolidate the category, there will be ups and downs but we must hold the impact waiting for the team’s values ​​to emerge.

The two points have often seen each other in progress – continues the coach Rosanero – not only when we had to recover the result. I know what I am doing and I am carrying it on, I can accept the criticism of the result but not of the rest. Saric I saw him very well, the minutes played in the national team did it well and I will probably be on the field on Saturday.

Criticism rains, after the match against Sudtirol, also for the goalkeeper Rosanero Pigliacelli with a large slice of rosanero cheering who asks to give a chance to the second Massolo protagonist in the past season: The role of the goalkeeper is delicate, in Europe when there There are many close matches often turning out but when you play once a week it is difficult to alternate goalkeepers because it takes stability. Massolo trains well and was decisive last year, I have so much esteem for him but my idea is to consolidate the role of a goalkeeper.

Finally, space also for some considerations on the individuals including Gomes, Elia, Mateju, and Floriano: I can only play eleven players, I have Estimates Gomes but I have an idea of ​​midfield and I am carrying it on. He is stabilizing himself as an athletic condition, it is a resource and I will try during the games to keep this level high by inserting it on the field.

I was very worried about Elia – continues Corini – but fortunately, the exams have averted every problem. Yesterday he returned, I saw him well and he will almost certainly be of the game. Mateju will evaluate him these days and we will see if he will be recoverable for Terni. Floriano can play inside the field, gives speed to the game, and also does it from outside. I consider it a ductile player who can play both on the outsiders and inside the field.

Bruori against South Tyrolers was probably not his best day – concludes Bagnolo Mella technician focusing on Bruori and Mariano – but he is always dangerous, we always have many players in the area, and the concept of his being alone I see him as a little wrongMariano is growing so much in terms of condition, he is finding the competitive stimulus and in Frosinone, he has been decisive in terms of danger. On the pole against Sudtirol, it was unfortunate, we believe in him and we are sure that it will be able to be decisive in other fundamentals too.