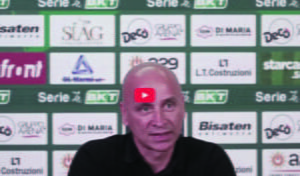 Reggina – Palermo 01/09//2022: Against a Reggina “strong and full of enthusiasm”, Eugenio Corini wants to give space to the newcomers who entered the second half against Ascoli. “They will be able to show off and show why they were brought to Palermo.

“It was a market, at least the part that I experienced, in which a beautiful work was done, of completion. The squad, which had already done very well in Serie C, needed to be consolidated. I thank the company for the excellent work: I am very happy with what has been done. Even if it will take time to integrate everyone: we will get our results over time “.

“Revolution? Certainly, some changes were made in the last game, which I will want to give continuity to in order to implement the idea I have in mind. They will be able to show off and show why they were brought to Palermo ”.

“So many players have arrived, it will be essential to focus on the goal we set ourselves: we will try to bring home as many points as possible, to have a support that encourages us to achieve results. The match against Ascoli leaves some things to improve: we will concentrate to do so. We want to transform that disappointment into energy ”.

“The goals scored against Ascoli are different: in the second goal, he made a great quality action, where we could certainly do better and that’s exactly what we’re working on. Gondo was skilled on the third goal ”.

“Reggina is very strong, they have a lot of enthusiasm. She comes from two victories in three races: in the last one, where she was helped by the opponent’s expulsion, they dominated. They have great players like Fabbian and Pierozzi, but also Majer and Crisetig. Then there is Menez who is in class. This year it will be difficult to find opponents who do not have an adequate squad to face the championship. “

“Saric entered yesterday, I saw him well. He trained with the team, even if he had been sidelined a bit from a tactical point of view in the last few weeks in Ascoli. He is certainly comparable “.

“It would take more attention to play at 2 pm. I had the boys have lunch at 11, to train them at 2 pm, and get them used to it. But these are “problems” that all teams will have “.

In Cassano’s words: “When you do this job, you have to get used to any kind of comment and opinion. I don’t care, I don’t want to answer. I can agree or not: I don’t care though. I only know that I was chosen by an important club, and I am grateful to represent Palermo. I will do it with all my collaborators ”.

“Vido is a talent. He still hasn’t managed to show all his qualities of him. In our system he can replace Brunori, but he can also work alongside him. I am therefore very happy with his arrival here ”.

“In recent years, Palermo has always played to win: starting with Serie B in the year of failure. Now we arrive with a different goal, there is a concept to give to the team which is that of consolidation “.

On Inzaghi, whom Corini replaced in Brescia last year: “I respect him very much, he is very humble: we have met many times. He has already won, he also played in Serie A. Last year he left the team well for me and allowed me to play in the Serie A playoffs. “

“I like to defend high, but sometimes you also have to defend by consolidating the dribble, making your opponents run. Then you can find spaces to go fast. This will allow us Saric and Stulac, but also Damiani, who have dribbling qualities ”.

“Sala has fully returned and is available: in the first three training sessions he has recovered form, but yesterday he trained normally”.