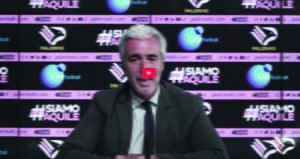 The Rosanero Etihad Manchester City Experience: A leap into the future and a great responsibility. The president of Palermo, Dario Mirri, intervenes in the press conference from Manchester to talk about this English experience, comment on the team’s results and explore various issues.

We have to drop the experience of these days for our sports center. In Palermo, we have to do something similar. We will make a sports center suitable for Palermo. We start a long way back but the structure of the sports center in Torretta will be functional and we will improve it over time. The integration with the City Group requires a lot of work and responsibility. We have everything to be able to move forward. We want to get to Serie A, it’s a dream and a goal but we don’t have a certain time. The Serie B championship is very difficult: in A many teams can go, in C I struggle to find four that can be relegated.

I don’t want to make fun of the fans, I don’t know how long it will take to go to Serie A. Today we have greater responsibilities than before, it depends on the whole club. We have to team up and achieve results. We started from Marsala, with San Tommaso the first home game; I remember all of these three years, it was a very tiring journey. Those who believed in it have more satisfaction than those who tried to demolish it. In three years, two promotions, an extraordinary sporting path. Palermo in Serie B could not get two thousand subscribers, now everything has changed. The journey begins and does not end, my dream is that next year there will be more subscribers than this season.

Soriano is a man from the Mediterranean, he is passionate like us. He also came to Palermo on vacation, he was the person who strongly wanted Palermo in the City Group. We are the first club welcomed here in Manchester, no one has been able to take advantage of the rooms where the players sleep or the fields. This demonstrates the participation that the City Group has shown us since March and April when we started the negotiations.

Now it is enough to talk about the distant past and these three years, it is already history. The big challenge is today, we have to make Palermo a star of our city. The team game? I try not to make invasions on the pitch but it is clear that we want to win all the games, we but also Corini. There are many variables between the will and the final result. We are working, there are many new players but there is no time, we want more, play better, and win.

The game comes after the result, which is the most important thing. I’m not an esthete, I’m aiming for the final result. Stage? The priority is the sports center. The stadium is a more ambitious and complex project, which involves major investments. The future stadium of Palermo is the “Barbera”, it also has an enviable position. It’s irreplaceable for us fans, I don’t see Palermo playing anywhere else.

For me, anyone who wears the Palermo shirt is better than the others. Brunori, for me, is much better than Haaland (laughs, ed.), I don’t hold back on Saraniti’s speech better than Cristiano Ronaldo. Transfer market strategy? The City Group wants to build first. Why don’t we take Ilicic? Before we needed the fundamentals of the team. We have players neither too young nor too old; it was a choice, having kids who have a perspective. Palermo, for them, is not a point of the passage.

The results help to have more fans. There are more subscribers probably because we won the playoffs. We are ‘attacking’ the international market, Palermo has not developed it as well as it could. After moving to the City Group, I heard many presidents who were very happy, I don’t know if they really (laughs, ed.).

In Manchester, there is also room for a singing test for Palermo. During the Etihad Stadium tour, the rosanero sang the song “Bohemian Rhapsody”, one of the most famous by Queen.

Brunori and his teammates were encouraged by Martin, an attendant who works at the Etihad Stadium and who involved all the Palermo players in the exhibition, which took place inside the dressing room of the City of Guardiola.

On Friday 23 September, in the afternoon, Palermo will play in a joint training session with Nottingham Forest, a team from the English Premier League.
The British club, led by Steve Cooper, was promoted to the top flight after winning the Championship playoffs last season. In the Premier League standings, after seven championship days, Nottingham Forest is in the penultimate place standings with 4 points obtained so far. In the squad of the English team, there are some of the best-known players in Europe such as Jesse Lingard, Renan Lodi, and former Atalanta Remo Freuler.

For the rosanero it will be an important test from various points of view, above all to definitively consolidate the team group, the game ideas of Mr. Corini, and the athletic condition of some players. Finally, on Saturday 24 September, the rosanero will have a final training session before returning to the Sicilian capital.