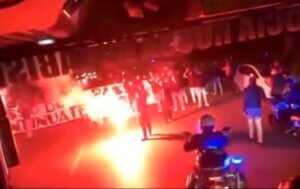 The joy for Palermo‘s victory against Paganese continued even after the team left “Renzo Barbera”.

The rosanero team was in fact greeted once again triumphantly by the ultras who waited for the bus in front of the Palme Stadium, exactly where the other time he was welcomed in style before the derby with Catania.

Choirs, banners, and smoke bombs lit by supporters to cheer and the Palermo players wanted to immortalize (and even post on social networks) the moment. The banner shown by the ultras was then hung on the external windows of the stadium: “Step by step, keep it up”.

In the meantime, also Mr. Tony Di Piazza from him social network, sent a message to the team.

Have a look at the Highlights