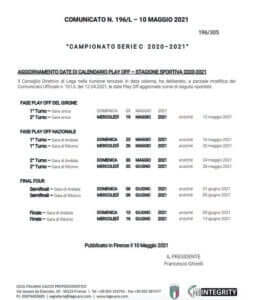 The official decision of the Lega Pro arrives after the covid cases that forced the match between Triestina and Virtus Verona to be postponed.

Postponement of dates. The second round between Juve Stabia and Palermo will not be played on Wednesday 9 May, but on 19 May.

The Lega’s Board of Directors in the meeting held today, deliberated, in partial modification of the Official Communiqué n. 161 / L of 12.04.2021, the Play Off dates updated as follows:

PLAY OFF PHASE OF THE GROUP

1st Round – Return Match WEDNESDAY 26 MAY instead of 20 MAY

2nd Round – Return Match WEDNESDAY 02 JUNE instead of 28 MAY